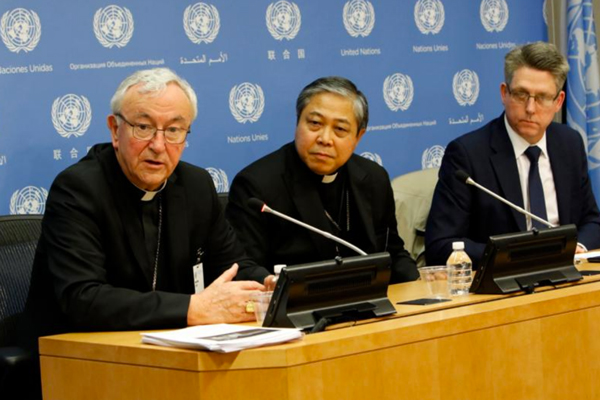 Pope Francis with Cardinal Nichols and the inaugural members of the Santa Marta Group at a meeting in the Vatican in 2014.

Cardinal Vincent Nichols (left) and Commissioner Kevin Hyland (right) will receive the Path to Peace Award on behalf of the Santa Marta Group for its work in the fight against human trafficking.

The Path to Peace Foundation, which supports the work of the Permanent Observer Mission of the Holy See, will bestow the 2018 Path to Peace Award upon the Santa Marta Group for its outstanding work in the fight against human trafficking and all forms of modern slavery and for its example of collaboration and innovation in the eradication of these evils.

Cardinal Nichols was appointed the 11th Archbishop of Westminster on May 21, 2009 and elected President of the Catholic Bishops’ Conference of England and Wales by unanimous acclamation on April 30, 2009. He was created a Cardinal by Pope Francis on February 22, 2014.

Mr. Kevin Hyland was appointed in November 2014 the UK’s first Independent Anti-Slavery Commissioner leading efforts to tackle domestic slavery and human trafficking. He was appointed Officer of the Order of the British Empire (OBE) for “services to Combating Human Trafficking” in 2015. He was formerly head of the London Metropolitan Police Service’s Human Trafficking Unit. As a police officer of 30 years he specialized in the investigation of organized crime, including homicide, gun crime, anti-corruption and human trafficking and slavery and was responsible for the convictions of a large number of international organized crime groups including those involved in sexual exploitation and human trafficking.

Together in April 2014, at the Vatican with Pope Francis, Cardinal Nichols and Commissioner Hyland helped to launch the Santa Marta Group.

At an April 7, 2016 conference at the United Nations jointly sponsored by the Holy See’s Permanent Observer Mission and the Santa Marta Group, attended by nearly 600 people, Cardinal Nichols said in his keynote address, “Human trafficking and slavery radically strips a person of this fundamental dignity, reducing them to the status of a commodity. It is an evil crying out to heaven. That there are over 20 million people callously held in modern slavery in our world today is a mark of deep shame on the face of our human family that no words alone can remove. The challenge that the eyes of faith see before us today is to work to our utmost to rescue, protect, assist and serve the poorest of the Father’s children who have been sold into slavery even as Joseph was sold into slavery by his brothers ‘in the beginning.’” 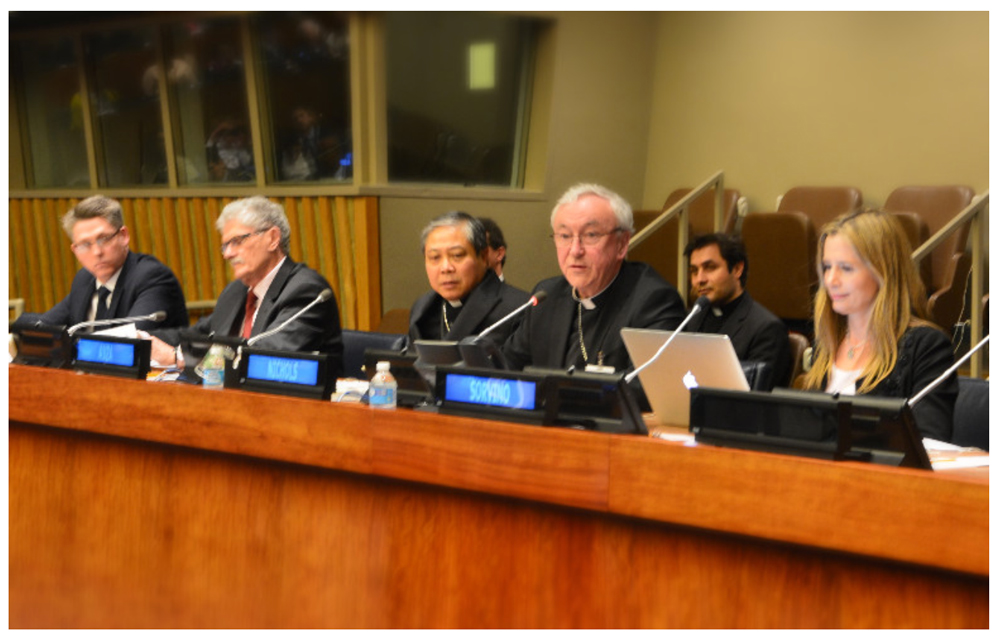 The work of the Santa Marta Group, he said, is “to foster a symbiotic relationship between law enforcement and the recourses of the Catholic Church in this great fight.”

At the same conference, Commissioner Hyland stated, “Modern slavery is an economic problem, as many victims are seeking to escape poverty and are lured into trafficking and slavery by the false promise of economic gain. It is a health problem, as trafficked women and children are most at risk of HIV infection. It is a gender problem, as unequal power relations reinforce women’s often secondary status in society. It is a legal problem, as victims are stripped of their human rights.”

He said that while the fight to eradicate human trafficking and modern slavery is a “huge challenge, we must remember that it took William Wilberforce just 20 years to end the British slave trade, and it was less than 30 years more when the global slave trade was abolished. And this was all at a time when slavery was as accepted as birth, marriage and death. …Now is the time to stop talking and start doing, as on this issue like no other, we will be judged solely by our actions, not our words.”

All are encouraged to come on the evening of May 23 at the Pierre Hotel to honor the work of the Santa Marta Group, to support the Permanent Observer Mission of the Holy See to the United Nations, and to join the effort to “start doing” so that, as Wilberforce did with the British slave trade within just a few decades, the world may do with modern slavery. 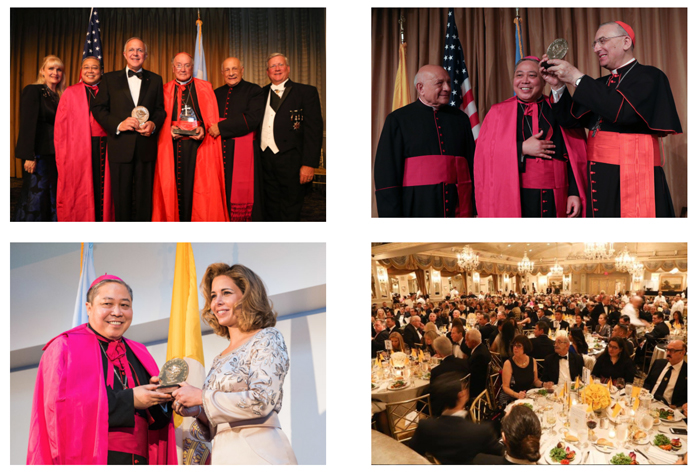 The Path to Peace Gala Dinner honors an individual or organization each year for outstanding service to the cause of peace.

Past honorees have included Kings and Queens, Princes and Princesses, Presidents and Prime Ministers, Secretaries of State and Secretaries General, Ambassadors, Grand Masters and Courageous Archbishops, Humanitarian Organizations and Leaders.

You can RSVP for the gala at holyseemission.org/rsvpPathtoPeaceGala2018