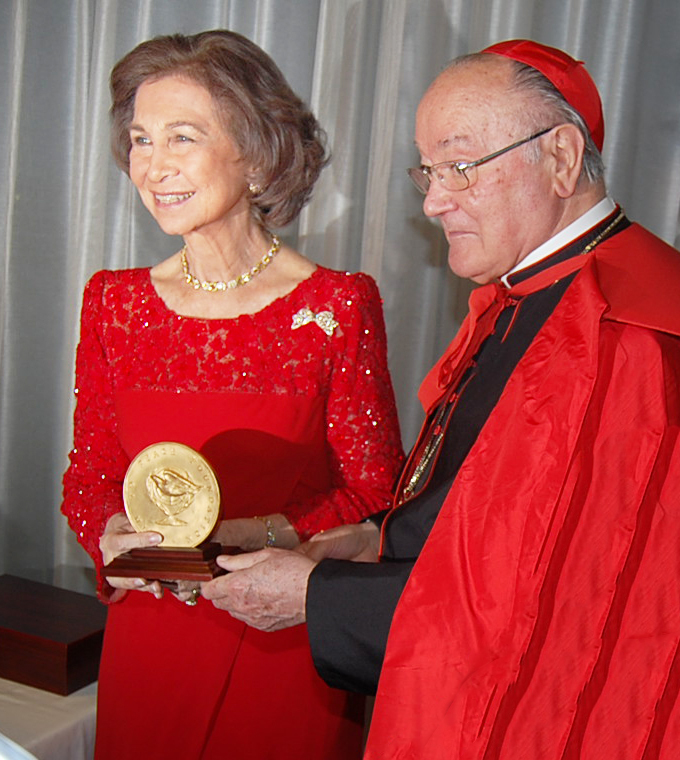 Her Majesty Queen Sofía was born in Athens on 2 November 1938, the first child of King Paul I and Queen Federica of Greece. Her family belongs to one of Europe’s oldest Royal Households.

She spent part of her childhood in Egypt and South Africa because her family was forced into exile during the Second World War. She returned to her homeland in 1946, completed her secondary education in the Schloss Salem boarding school in Germany and then returned to Greece where she specialised in childcare, music and archaeology. She was a reserve member of the Greek sailing team at the Olympic Games held in Rome in 1960.

On 14 May 1962, she married Prince Juan Carlos de Borbon y Borbon, in Athens. They have three children: the Infanta Elena, born on 20 December 1963; the Infanta Cristina, born on 13 June 1965, and Prince Felipe, born on 30 January 1968. They have eight grandchildren: Leonor and Sofía de Borbón Ortiz, the daughters of the Prince and the Princess of Asturias, Felipe and Victoria de Marichalar y de Borbón, the children of the Infanta Elena and Jaime de Marichalar; and Juan, Pablo, Miguel and Irene Urdangarin y de Borbón, the children of the Infanta Cristina and her husband, Iñaki Urdangarin, the Duke and Duchess of Palma de Mallorca.

In addition to her official and institutional engagements, the Queen devotes much of her time to social and welfare activities. She is the Executive President of the Queen Sofia Foundation. She is also the Honorary President of the Foundation for Aid for Drug Users and of the Royal Trust for the Handicapped, as well as of various cultural and musical institutions, including the Queen Sofia Higher School of Music.

She also participates in a number of international projects for the promotion of rural women and for the development of micro-credits for the disadvantaged.

The Queen is an Honorary Member of the San Fernando Royal Academy of Fine Arts and of the Royal Academy of History. She has received Honorary Doctorates from the Universities of Rosario (Bogota), Valladolid, Cambridge, Oxford, Georgetown, Evora, New York and Seisen (Tokyo).